Nkechi Blessing, a popular Nollywood actress, has taken offense at people who continue to call her Opeyemi Fagan’s ex-wife.

The entire public has received an unreserved apology from Nkechi for falsely claiming to be the Ekiti State politician, Opeyemi Falegan’s wife.

Nkechi stated that she had ended the relationship since her most recent trip to London. In an Instagram post, she warned Opeyemi Falegan to stop using her identity.

Opeyemi Falegan, on the other hand, had been pleading and wailing, but she could not be drawn into such since a broken romance is preferable to a disastrous marriage because she could see all the warning signs.

Nkechi Blessing clarified that she was never married to Opeyemi Falegan and expressed apologies to anyone who had mistakenly believed they were.

Nkechi Blessing also asked Opeyemi Falegan, her ex, to put the past behind him and wished him luck in his upcoming relationships.

She wrote: “I am going to say this for the very last time…… I was never married to anybody, my mama no collect my bride price from anybody before she die, nobody paid a dime on my head, I was only in an open relationship that everyone tot was marriage, if I were to be married I would have done everything to make it work…. Just today a stupid station still made reference to my past relationship…. Abeg una no dey tire? What the actual F*ck”. 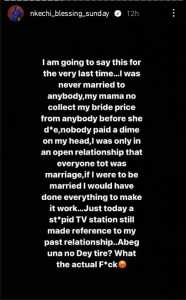 The post “I Was Never Married To Anybody” – Nkechi Blessing Clears The Air On Marriage To Opeyemi Falegan appeared first on Information Nigeria.